In the heart of Tempe, Arizona, amongst the hurried activity of the nearby university, artist Frank Gonzales makes his home on a quiet street, where his studio provides a sanctuary for creative work.

Knowing that environment is important and can impact creative work, he peppers his studio with important items that bring inspiration. Alongside the tubes of paint and jars of paint mixtures, his primary easel sits, facing the window overlooking his sleepy front yard.

A terrarium of carnivorous plants sits on the table across from his easel, next to a wide bookcase filled with art and plant books, magazines, and supplies. One of his cats lazily sleeps under another table covered with newly finished works nearly ready to be sent to one of his galleries. 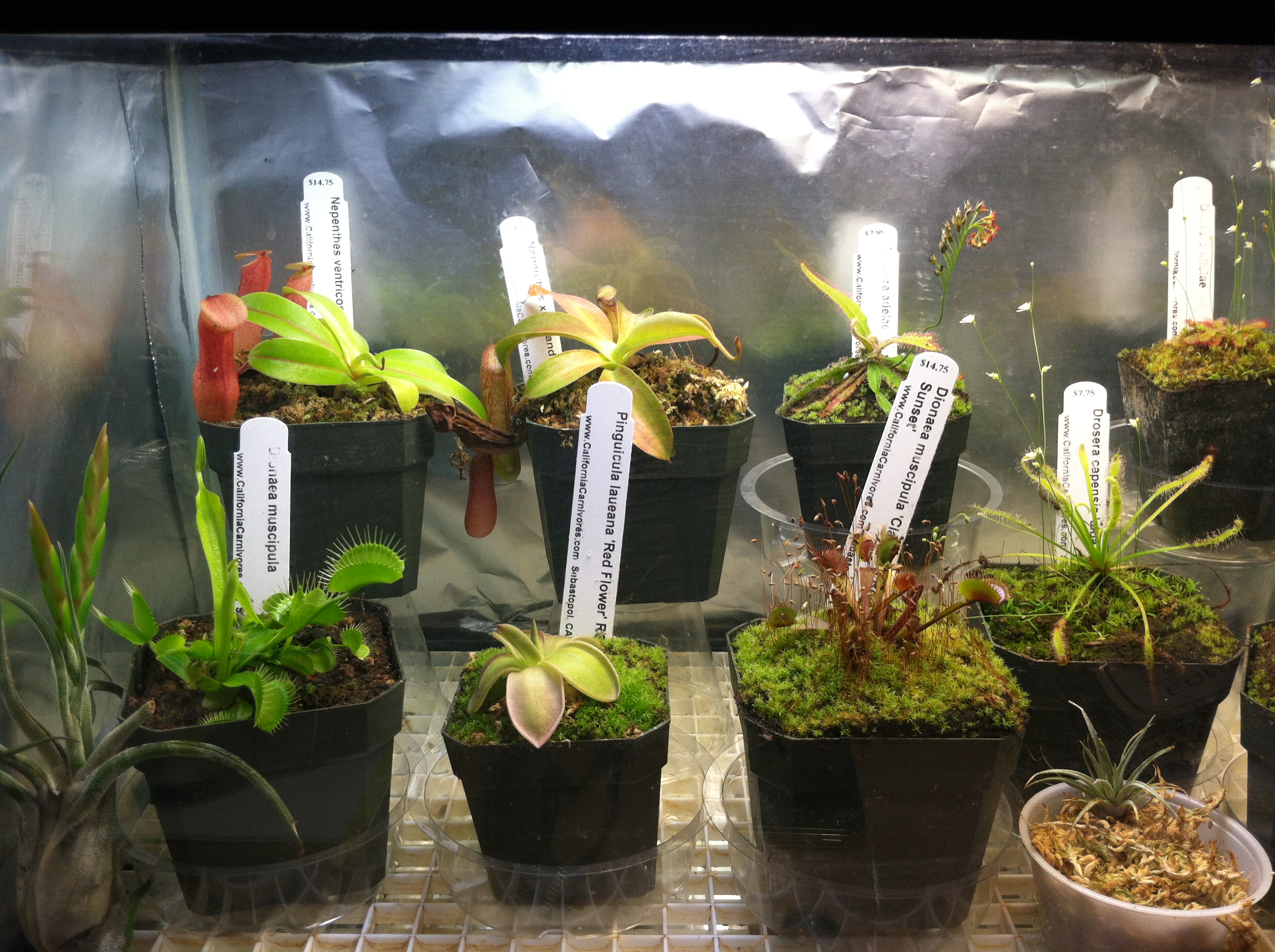 Botany and ornithology inform his works; bright, playful paintings that reveal the type of personality that each creature exudes. Most of his pairings are unusual—not necessarily the elements of natural habitat or examples of symbiotic relationships in nature—and that’s what’s fresh about Frank’s work.

We talk about what it means to be “creative.” The ever-unfolding process revealing unintentional secrets about its maker; the way a body of work grows with a person as they age, reflects their mindset at a given time.

Creativity will keep you honest, we concur, as we dialogue about what it means to be immersed in the work, tethered between the all of who you are as an artist, and the unknown that can only become known through the process of the work’s completion.

Why birds? I ask. His honest answer is simple. He’s not really sure.

“You don’t always have to have an answer to everything. Man’s really good at that. Creating reasons for everything,” he says.

He tells me that early in his career, he felt pressured to have an answer to all of the questions that viewers and gallery owners pose. As Frank has become a more seasoned artist, he admits that the experience of enjoying art can simply be the act of observing something beautiful—without looking too deeply into meanings.

Thinking back to college, he recalls, however, an artist roommate with whom he had a bit of friendly competition.

“We would see what the other was painting and would feed off the energy. It was wonderful. We would experiment with textures, subject matter, mark making, etc. Eventually my interest in the figure fell by the wayside and I wanted to approach different subjects. I was into abstract landscapes, textures and bird imagery. The birds at first were really stylized and mostly about how they were painted versus bird type. As time when on my interest in birds and elements of nature really started to form and take shape. I always loved plant life but never thought about adding it to my work.  Fast forward 10 plus years and here I am,” he says, “still trying to find my way.” 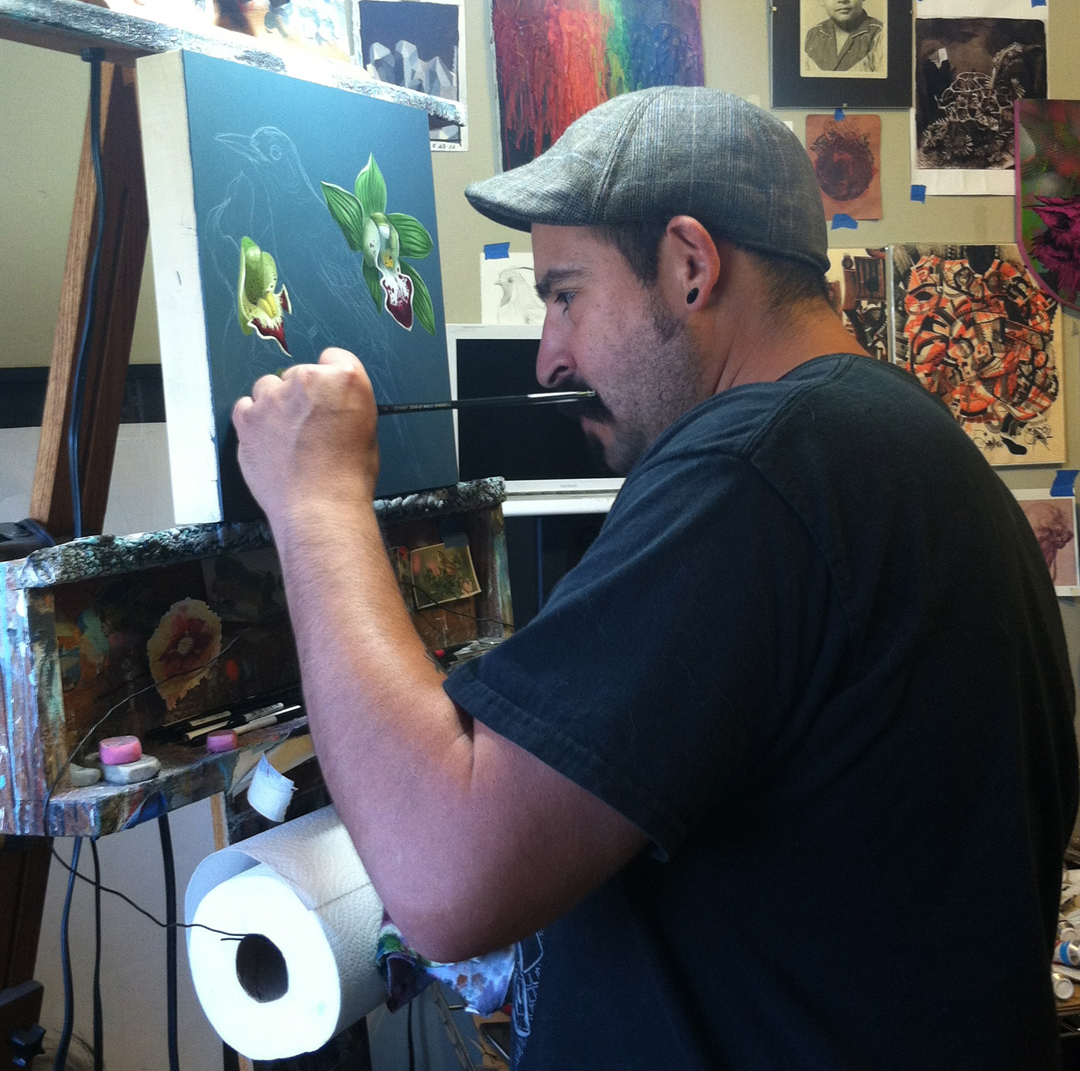 To make art, I conclude in my own mind, is to document life. “I always hear folks state their lack of art expertise before explaining why they like a painting or what they gravitate toward,” Franks says. “You don’t have to be an art ‘expert’ to appreciate art. All you need is a connection, that’s it. You don’t even have to have an explanation why.”

It’s existential as much as all things are, a slow and natural unfolding of moment-by-moment.
“There’s no formula to my approach,” Frank says. “It’s organic. Usually one idea will spark another and I never know what the painting will end up like. I will spend some time looking through books, reading, staring at plants or taking a walk and eventually something with catch my attention. Once I have something I’m interested in I will usually hunt for something to add to the dialogue. It’s funny how sometimes it will almost tell you what it wants. I know all too well if you try to force it, it will just turn out feeling forced or awkward—and not in a good way.”

I think about a recent newsletter in which I discussed the magnificence and power of owls. Frank’s works “Fortitude” and “Dauntless” exemplify these characteristics. 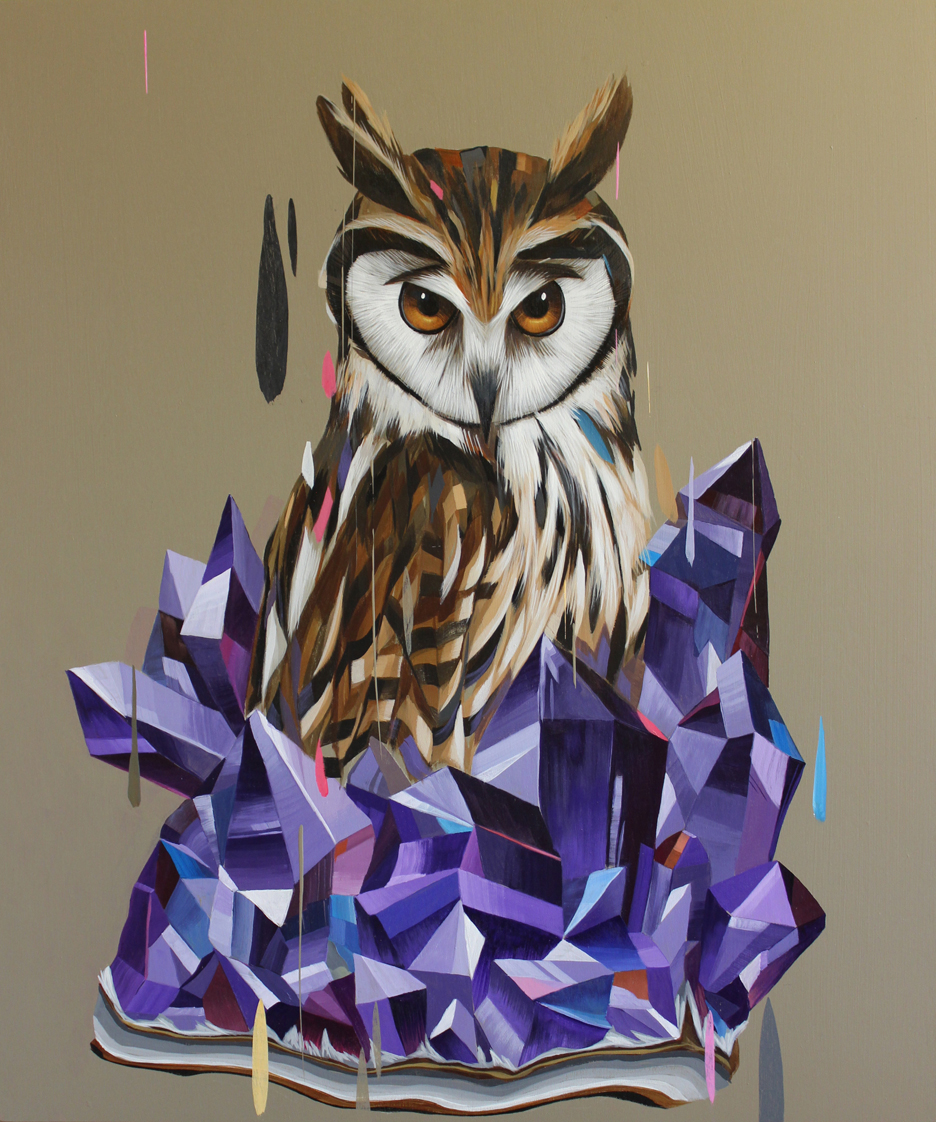 “They convey a sense of power on a certain level: their eyes say it all,” he says. “They have a beautiful mystic about them. They’re beautiful birds of prey.”

The unique—and often unnatural—pairings that Frank chooses to portray in his works give them an aspect of play. Natural habitats aren’t necessarily a consideration in his works, which gives them an experience of transcendence, a sense of joy.

“I love playing with elements that don’t naturally vibe in real life,” he tells me. “Not all my work is extreme in that regard, but I’m always open for possibilities. I love staging combinations as if they could be real. That’s the beauty of art, its all relative.”

All relative and all connecte 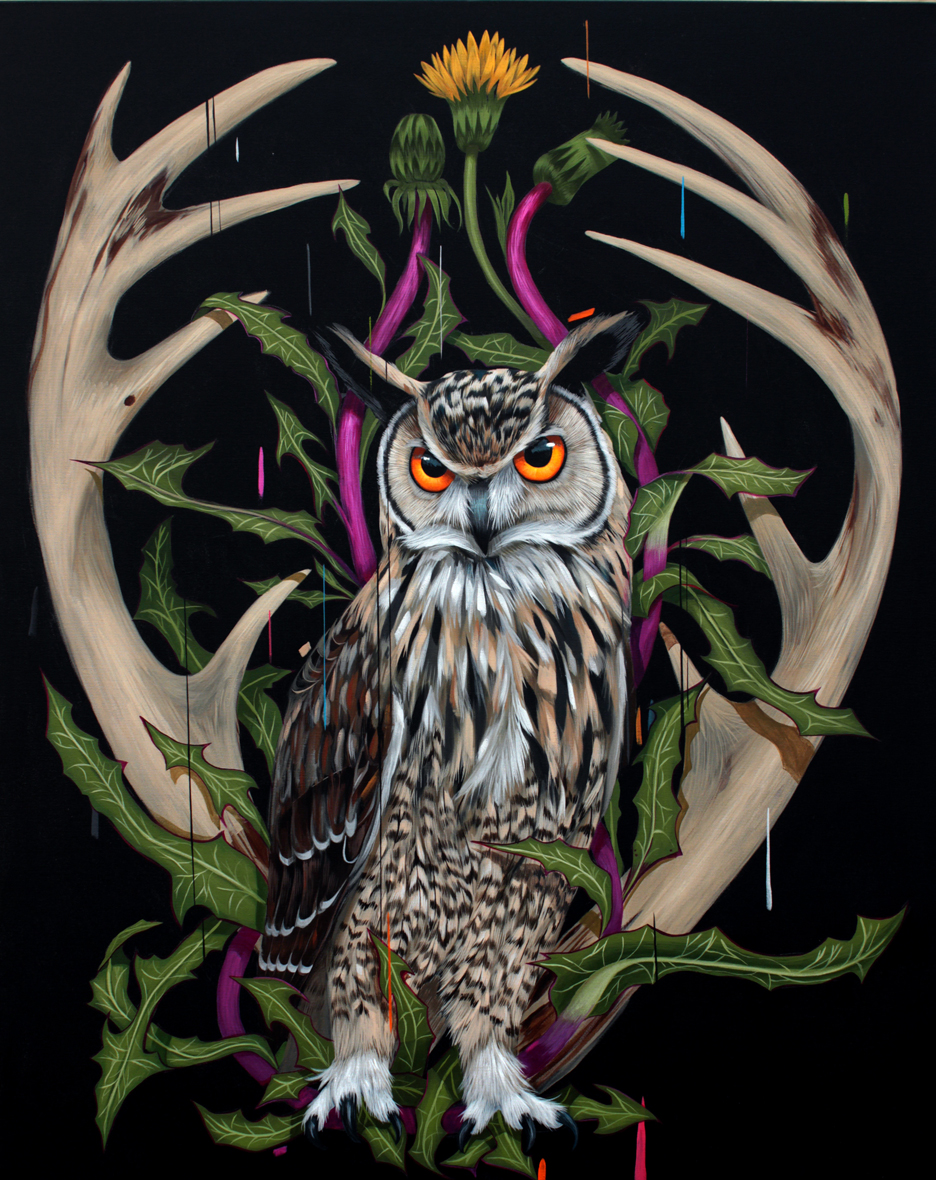 d, I think. We chat for some time about philosophy, Eastern thought and the way those notions references the child, a return to innocence. We talk about the fact that nature will always be there, that it will never really go out of style. We find that we both have an interest in awareness, consciousness—and the incredible amount of courage and trust required to see the creative process through. You have to be in the moment to make it work.
We linger for a few moments on the ways in which all these things are connected—the ways in which all is connected: art, science, philosophy, literature.

“I think about a lot of things: physics, spirituality, the universe, rocks, air, cells, mortality…the list goes on,” he says. “It’s taken me a long time to grasp that concept. Of course I would read how things were connected from a scientific view and even from eastern philosophy. I believed it, but didn’t understand it. I don’t subscribe to any specific philosophy or religion. I do however, respect life and consciousness. I still grapple with natural phenomena and ask the same questions man has been asking since the dawn of time.” 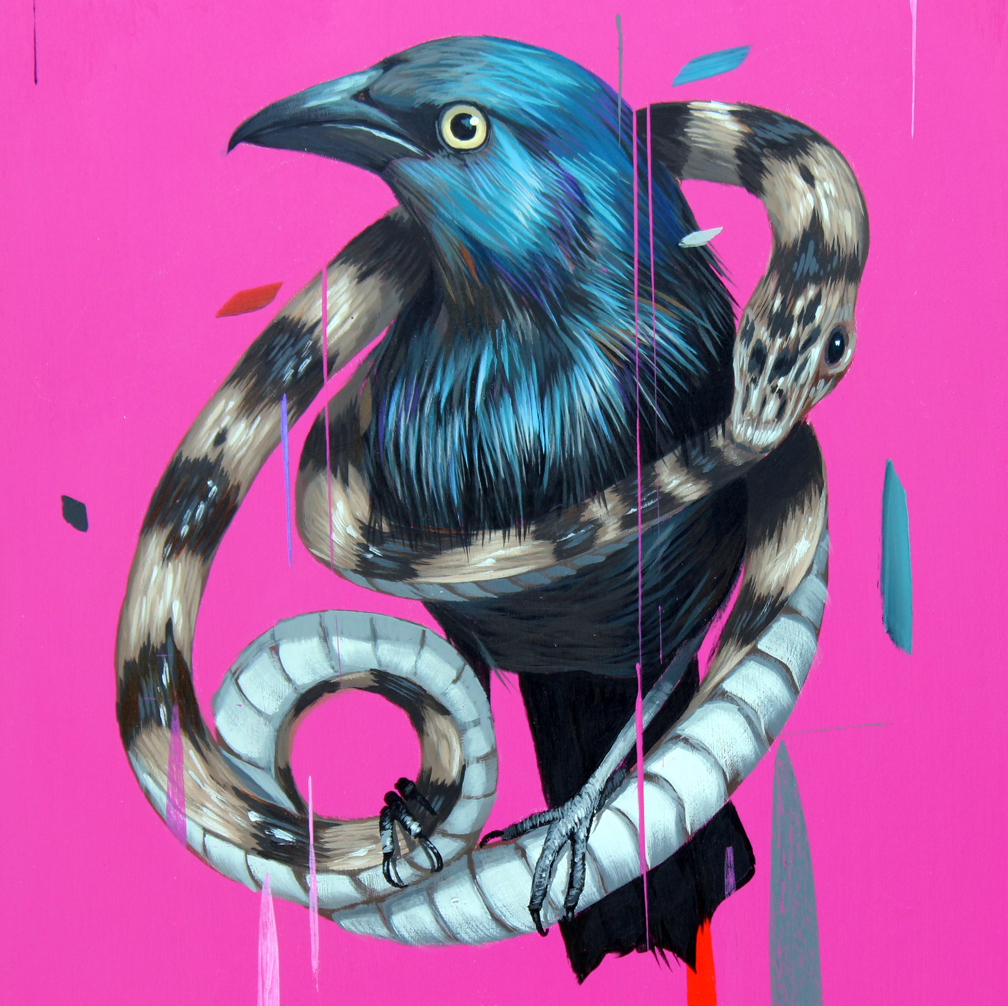 “Until I figure out what it all means,” Frank tells me, “I’m going to make as many paintings as I can.”

Frank Gonzales is represented by Beals & Co., Santa Fe, New Mexico. Works in this post in order of their appearance: “Mythology” “Fortitude” “Dauntlesss” and “With You.”

2 Replies to “The Studio of Frank Gonzales”